When NOT to Use React Native for App Development? 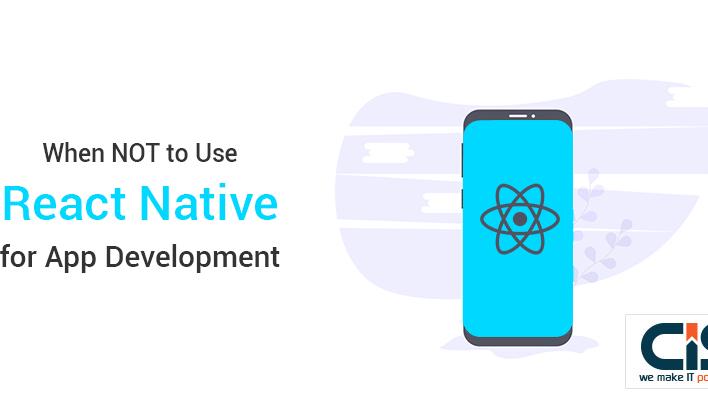 When it comes to React Native, it is essentially a framework for creating natively-rendered apps utilizing ReactJS, which is a JavaScript code library that is developed as well as maintained by Facebook.

Essentially, the main selling point of the framework is its inherent ability to develop cross-platform applications which offer a much better and seamless user experience than any of the current hybrid app development options present in the market. Hence, it is being utilized by most of React Native development services.

However, there is certainly a strong argument that can be made against the React Native. The notion to utilize natively-rendered components is quite an intuitive and innovative approach which has a lot of promise. Moreover, there are certain tradeoffs which are involved in actually making it work, which mean React Native applications certainly fall short of the actual native apps. There are major issues that the critics have with this framework which are mentioned below.

Among the main drawbacks of the React Native is its performance. Essentially, it is quite better than any of the hybrid tools as well as web apps. However, there is certainly no way to get around the entirely humungous overhead framework which slows down the performance when it is measured against the various native apps. Also, in case of straightforward proof-of-concept work and simple apps, the entire reduction in the actual performance isn’t quite noticeable enough to certainly have a major impact. Utilizing React Native for anything particularly more complex could often mean taking a direct hit to the entire user experience. A mobile app development company should consider this aspect while developing an app using React Native.

The motto of “Write Once and Simply Use Anywhere” of React Native isn’t actually entirely accurate. The developers have to configure the app for each and every platform readily. Also, the size of that additional code depends on the function of the app and the particularly relevant operating system. Only a majority of the codebase can be actually fully shared. Even though this still cuts the entire development time by quite a significant portion, still it essentially means that React Native isn’t the best platform-specific solution.

When it comes to size, React Native applications are bigger than the corresponding native apps. It is one of the few unfortunate disadvantages. The users with much older or even economy model devices certainly may not be actually able to handle it readily.

Also, those in the developing market generally don’t have much more reliable access to the faster 3G networks, hence downloading large applications takes a lot of time. Also, customers certainly don’t like to utilize their entire device storage on apps. Even they may choose not to download a large app, and when they actually start to run out of space for their photos or videos, these larger apps are the ones which are the first to get deleted. Experienced developers do have some tricks for reduction of the size of a particular React Native application, but this should certainly be kept in mind. The developer can do the same in case of iPhone application development using React Native.

When it comes to debugging of React Native apps, it can get quite complicated. Applications can essentially be developed with a mixture of different custom native codes along with third-party plugins as well as regular React Native components. Hence, it takes quite an experience to navigate through the app whenever it comes to tracking down the problem’s source.

One of the downsides of React Native is that it still has a lot of maturing to attain. Facebook is currently tweaking and updating it actively in response to user feedback. However, they often tend to be quite slow to update the SDKs when Apple or Android does readily.

It is also worth mentioning that React Native is quite a younger tool, and hence its documentation isn’t quite as user-friendly as it needs to be. Essentially it varies between quite dense in few places and very loose to be actually helpful in others. A React Native development company can certainly face issues due to this.

It is something which will certainly ease over time. However, it can certainly be a hassle at present. Various third-party libraries are now springing up, which are essentially a mixed blessing as they provide more options for helpful shortcuts. However, they can easily introduce various vulnerabilities into the app if they aren’t actually carefully vetted.

When you can’t use React Native for app development, then there are some options which you can consider. Some of them are:

They are the only possible practical option for the graphics as well as processing-intensive applications. These apps can outperform every other kind of application on the market. Certainly, it takes time and money to create native apps, but most enterprise apps actually don’t need a high level of performance in order to be successful.

These are essentially web apps along with a particular native “wrapper”. These apps have the same benefits as React Native when it comes down to development speed as well as cost savings. But, most of such apps can’t fully access the hardware of devices, and the user interfaces don’t actually have a particular native feel.

There are a plethora of reasons why React Native shouldn’t be used for app development. Above-mentioned reasons clearly state such scenarios and outline this proposition.